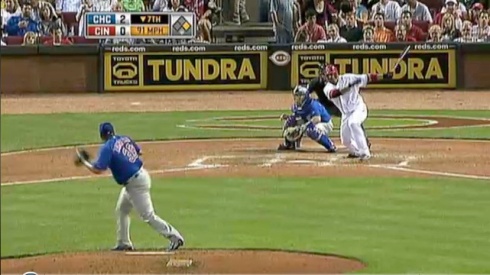 My frustrating 2009 Chicago Cubs won their series against the Reds last weekend in Cincinnati, three games to two, and I watched a lot of it on TV, but all I kept seeing was that eerily familiar Toyota Tundra ad on the wall behind home plate.

A few corners of the internet have already noticed how deeply Zappaesque the Toyota logo is, and it’s from those corners that I rip off this perfect comparison image:

Really perfect, because that mustache shot is a detail of the cover image from a 1974 Frank Zappa album, the one that’s really called ‘ but is best known (and pronounced) as Apostrophe.

And it was right at the very beginning of Apostrophe that Zappa “dreamed he was an Eskimo,” in the song “Don’t Eat the Yellow Snow,” first in a four-part suite of connected story songs about stupid things going on way up in the frozen north. Second in that suite is the brilliant “Nanook Rubs It.” Listen to ’em both right here.

The story in these songs is rather dumb, and it goes like this: Nanook the Eskimo boy is hanging around the igloo, debating about whether to go to “the show,” when a fur trapper comes up and starts beating Nanook’s favorite baby seal. Nanook, real pissed, blinds the fur trapper with snow yellowed by huskie whizz and pounces on him too. The blinded fur trapper wonders what the hell to do, then recalls an “ancient Eskimo legend” about how, if you ever get blinded in a conflict with someone named Nanook, you must go on a very specific sort of quest.

If fact, according to Zappa’s ridiculous lyrics, you have to

I guess Toyota's marketing geniuses felt like they could save some Arctic trudging time for that all-important "Blinded by Nanook" sector of the American truck-buyer demographic.

–Pancake Dominion would like to thank Songza.com and Scott Robbin for access to the linked Zappa songs and for pointing us toward “Nanook Rubs It” after our shared realization about the Toyota logo.