A Big Fan of the Genre

I woke up this morning and, first thing, fired up an old VHS tape:Death Blow: A Cry For Justice (Raphael Nussbaum, 1987). 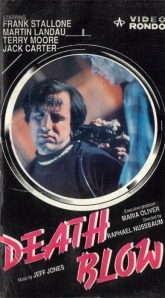 The night before, Amazon Marketplace had informed me that some kind soul in Ootawara-Shi, Japan, had purchased my copy of Death Blow from me. It takes a while to get things shipped over there, so I wanted this videotape packed and in the mail that day. Work was in 45 minutes, so I had to use that handy FF>> button quite a good deal to get through (most) of it. It’s the kind of movie where you can just catch one line of dialogue per scene and pretty much know the deal.

Actually, it was technically not my VHS tape. It was my brother’s; I’ve been selling some tapes for him. When I told him that Death Blow had sold to a man in Japan, he texted me back to inform me that: “Thats the one the bootlegger records on seinfeld.” I thought about it a minute. He was right. In The Little Kicks, a 1996 episode of Seinfeld, Jerry Seinfeld gains some fleeting street fame as a wunderkind theatrical bootlegger, for his work on the cam version of the fictional film Death Blow, then in fictional theaters in Seinfeld‘s fictional Manhattan.

But I knew, from looking over Death Blow‘s VHS slipcase that very morning, that the real Death Blow had been released in 1987. We we’re obviously dealing with more than one Death Blow here.

This all got me thinking. They made up a whole hell of a lot of movies over the course of the Seinfeld series run, their titles ranging from Too Dull To Give a Crap About all the way to So Bad I’d Love To See an Actual Movie Called That.

2. Blame it on the Rain – Not Real: I’d probably blame this one on Milli Vanilli. Luckily, it’s not a mistake yet made by Hollywood.

3. Blimp: The Hindenberg Story – Not Real: Time to explode the myth on this one.

4. Brown-Eyed Girl – Real: Too sick of this song to ever watch a movie called it.

5. Checkmate – Very Real: Jeez, there’s like a million of these. ALL GREAT!

7. Chunnel – Not Real: Seems like they must’ve been going for a CHUD-meets-England/France-transit type thing with this one.

11. Death Blow – Real: As described above and below. “The zoomings, the framings…I was enchanted!”

13. Firestorm – Very Real: Six Firestorms is too many Firestorms.

17. The Other Side of Darkness – Not Real

18. Ponce de Leon – Real: And real old. The 1924 version (a short film) starred Monte Brice, writer of A Whole Bunch of Crap I Never Heard Of.

19. Prognosis: Negative – Not Real: I like it when a movie’s title is also a review of that movie. Diagnosis: Fabricated

21. Sack Lunch – Not Real: Sorry. You can never go see a movie called Sack Lunch that you yourself did not conceive, write, direct, edit, and screen for yourself.

I’m sure I forgot a few. Give me hell about it in the Comments and I’ll add ’em, but please: “Not because of who I am, but because of different reasons….“