Star Wars: The Last Jedi reviews are in and…

During a Dark Knight rewatch, I discover that I live in a county, near a city and a major road, all named after same guy as Bruce Wayne.

The Whiplash of UHF

Last night, the following two media items were in a pile on my computer desk:

Mother is a pretty decent movie. Its value in this format on Amazon is virtually nil. The movie itself is not that easy to download, or wasn’t when I checked. I decided to keep it. I’d watched it just a few months earlier. Albert Brooks is John Henderson in the movie; Beatrice, his mother, is played by Debbie Reynolds. As you can gather from the end of this clip, Beatrice, the mother in Mother itself, lives in Sausalito, California, and the film was shot there on location, among other places.

Here again, the Amazon value of this item is virtually nil. I considered just ripping it to mp3. I like several Huey Lewis songs. True, the image on the CD itself, of Huey mid-jump during a live set, is kind of great. As I flipped through the CD booklet, I gathered that Huey Lewis & the News were a San Francisco-based band. I’d never thought of them that way, but there it was, in black and white. Next, I figured I’d find out whether one of my dad’s favorite Huey Lewis recordings had made this particular Best Of disc. And sure enough, there it was, track #10: “It’s Alright,” an a cappella take on a Curtis Mayfield song. Finally, I read the small-print recording info under the track title listing:

This 1993 recording of “It’s Alright” had been set to tape in Sausalito, California, at a studio called Muther’s Recording.

I decided to keep the CD, too.

I didn’t come up with this, but it’s just the kind of Pancake Dominion observation I haven’t myself made in a long while:

A) a rousing critique on the way authoritarian regimes use gladiatorial mass media spectacles to foster public obedience, or….

B) a really depressing and effective example of just such a spectacle in action….

….here is your Shortest Possible Review™:

I have one main Pancake Dominion-type thought about The Artist and the character Peppy Miller, and then just a bunch of other thoughts. Perhaps it’s best to present it all as a set of discrete facts and images. You should watch The Artist before reading any of this, because of  *SPOILERS*: 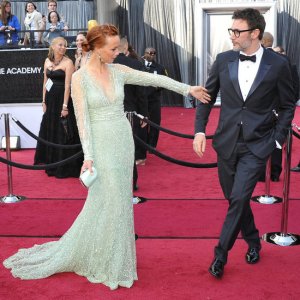 • Michel Hazanavicius is the screenwriter and director of The Artist. He has been married to Berenice Bejo for several years. 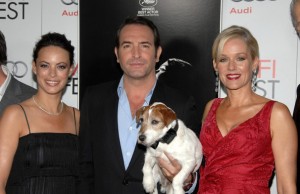 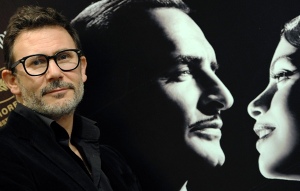 • According to Hazanavicius, "The character George Valentin is my fantasy about Jean, and Peppy is my fantasy about Bérénice. It's the way I see them." He's also hinted that George Valentin was partially based on John Gilbert, a silent film star who once rivaled Rudolph Valentino as the silver screen's "great lover" but whose career was imperiled during the onset of the talkies. 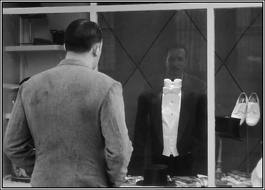 • For much of The Artist, George Valentin is a fallen-film-idol-turned-filmmaker who believes himself deserving of more success than he has recently achieved. In that way at least, George is a reasonable stand-in for Michel Hazanavicius himself, a filmmaker of moderate success prior to the release of The Artist. 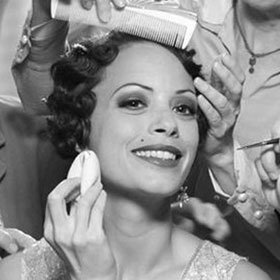 • Berenice Bejo's character in The Artist is named Peppy Miller. Peppy Miller ascends to become a hugely popular movie star after having been accidentally discovered by George Valentin. 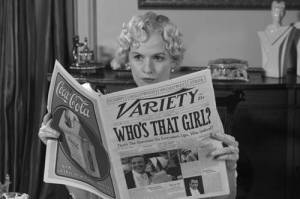 • Penelope Ann Miller appears in The Artist as Doris, the increasingly disaffected wife of silent film star George Valentin, played by Jean Dujardin. (For more on the name "Doris," see the very bottom of this post.) 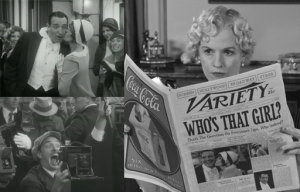 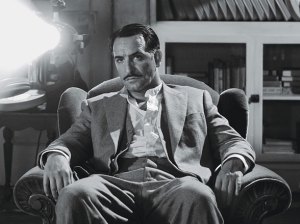 • Thinking about all the above, doesn't it seem true that Michel Hazanavicius based George Valentin on Jean Dujardin somewhat and a bit on John Gilbert...but just as much on himself? 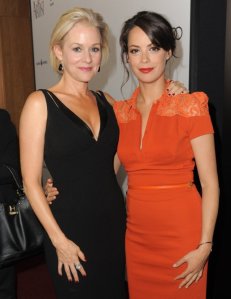 • And isn't just odd and confusing that Hazanavicius named his wife's character Peppy Miller, which sounds so much like just a shorter version of "Penelope Ann Miller"? I can't be the only one who found this weird and distracting, can I?

Maybe I am the only one who noticed. Either way, here are some facts and observations about The Artist that pretty much just add to the richness of thought I’ve had around the Peppy Miller/Penelope Ann Miller thing and the movie in general. These things just occur to me and are interesting in this context. 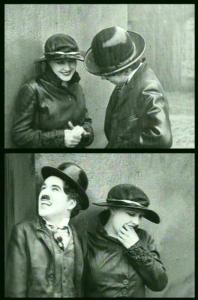 • Charlie Chaplin discovered Edna Purviance sort of by accident, through a friend of a friend. According to one story, Chaplin claimed to a roomful of people that he could hypnotize anyone. He asked Edna to "Fake it," and so she did, just for a laugh, which impressed Charlie. Purviance and Chaplin were romantically involved during Chaplin's ascendancy toward becoming the world's most beloved movie star. He even considered marrying Edna. 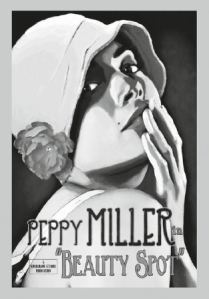 • While writing his silent movie, Michel Hazanavicius used the working title Beauty Spot, based on the distinguishing mark that George Valentin places on Peppy Miller's face—the "something different" that he says she needs to set her apart, to make her a star. Thomas Langmann, the film's producer, insisted on changing the film's title to The Artist. That title puzzled me, I mean, who's "The Artist" in this? George? He's an actor and a bad director, not much of an "artist." Maybe the dog's the artist.... Anyhow, leave it to a producer to saddle a movie—even one mostly about what sets a star apart—with a generic title that barely sets it apart from anything and barely even makes any sense in the first place. Beauty Spot, on the other hand, made so much sense, the film paid homage to its own original title with the poster above, which appears in the film right about when Peppy Miller reaches the height of her stardom. 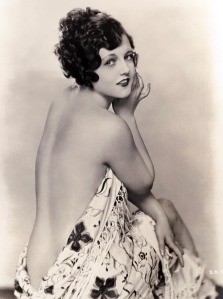 In 1930, Doris Dawson starred in a 21-minute musical called The Beauty Spot. 1930 was still pretty darn early for musicals, and some of The Artist takes place in that year too. I haven't been able to turn up any other info about the movie, beyond its IMDB page. I wonder what it's about, don't you? I also have to wonder if Michel Hazanavicius saw the same IMDB page while writing his script for Beauty Spot.